These are some of the words that have been used to describe the Spanish artist, Salvador Dali.

The Fundacio Gala-Salvador Dali manages the world’s largest collection of Dali’s work in three locations in Costa Brava, Spain….Figueras, Portlligat and Pubol…which together are known as the “Dali Triangle.”   As I visited these sites during my five weeks in Costa Brava  this summer, I realized that, yes, he is all of those things, resulting in a complicated and interesting figure.

Gala, Queen of the Castle

The first corner of the triangle that I visited was the Casa-Museu Castell Gala Dali located in the medieval town of Pubol. 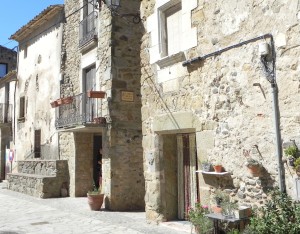 I arrived there by rental car, although you can also take a RENFE train to the Flaca Station and catch a taxi from there 4km to the Castle.  Reservations are not required in advance, but the castle is not open for part of the year and is closed on Mondays, so see the Fundacio’s website for schedule and details.

Dali purchased this 14th century castle as a residence for his muse and wife, Gala, having promised her that he would make her queen of a castle.

Dali was only allowed to visit the castle via her written invitation.  (They were both rumored to have taken other lovers, but despite these dalliances, their relationship survived for 50 years.)

Having been to the Museum in Figueras (see more below) on a previous trip to Spain, I noticed that this property was more subtle, with less of Dali’s surrealist imprint. 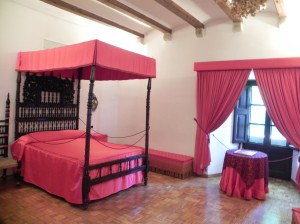 Keep your eyes open, however, and you won’t be disappointed as there are plenty of signs of Dali sprinkled throughout… 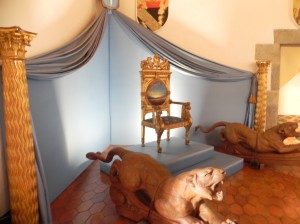 Pubol Castle – one of several elephant sculptures in garden

Also on display at the castle are a collection of his drawings, Gala’s dresses, their Cadillac, and Gala’s crypt.  After her death, Dali moved into the castle for two years… 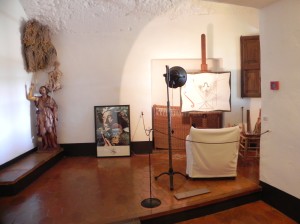 …but his broken heart did not allow him to stay longer.

A few weeks later, I headed to a second corner of the triangle, the Dali Theatre-Museum in Figueras.  I took the RENFE train from Girona (about 20 minutes; from Barcelona, it is about 1hr, 40min).  It is recommended that entry tickets be purchased in advance via the Fundacio’s website.  It is also recommended that you have a guide take you through this museum, which you can either book when you arrive, or in advance via email to tmgrups@fundaciodali.org.

I was visiting the museum in August, the only month when you can see “Dali By Night,” when it is open from 10pm to 1am and visitors are limited to 500. I arrived in Figueres in the early afternoon, so I also had time to wander around and enjoy this very comfortable town, with its many lively cafes along La Rambla… 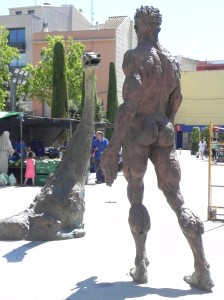 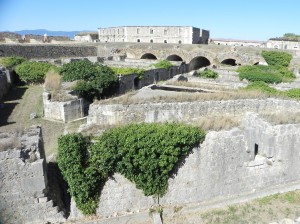 …and other museums such as The Toy Museum of Catalonia and the Museum of the Emporda.  I found myself wishing for at least an extra day here.

The Dali Theatre-Museum was designed by Dali himself, and is considered to be the largest surrealist piece of work in the world. 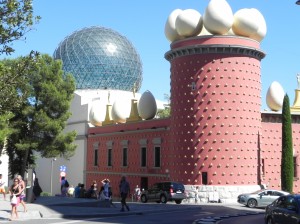 It is built on the site of the former Municipal Theater, where Dali had his first public art exhibition in 1919 at the age of 14.  Obvious from the outset is Dali’s obsession with bread which he considered to be the most basic element of life…

Figures on outside of Dali Museum w-bread on heads – Figueres 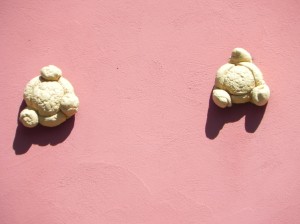 Bread is what dots the outside of the Dali Museum – Figueres

And then there are the eggs…. 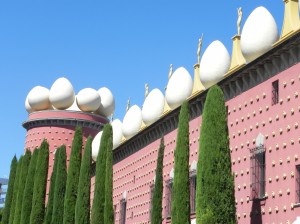 Side view of Dali Museum, Eggs and Statues along the roof – Figueres

The most widely interpreted meaning of the egg to Dali was that it represented to him a sign of hope and love.  My guide, Gloria, explained that one of the more specific symbols for the egg came from Dali’s belief that he was the reincarnation of his older brother, who had been named Salvador first, and who died before the artist was born.

Upon entering the museum, you will not know where to look first.  You will see melting clock images throughout Dali’s work, interpreted to be a rejection of the concept that time is rigid.  (His first and most famous melting clock piece, The Persistence of Memory, is housed in the Museum of Modern Art in NYC.) There are also many painted figures of his muse and wife Gala, such as Gala Nude Looking at the Sea, which at a distance appears to be Abraham Lincoln. Then there is the The Face of Mae West Which May be used as an Apartment…. 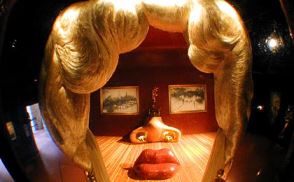 There are many illuminated places within the museum which offer a unique experience when visiting the museum at night, such as the courtyard… 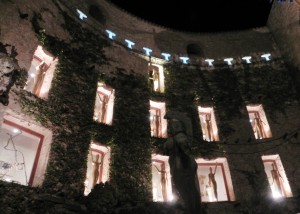 …where the centerpiece is Dali’s Rainy Cadillac. 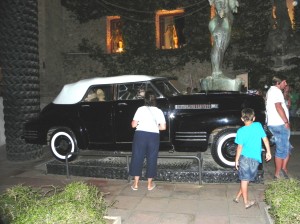 For one Euro, you can cause a downpour inside of the Cadillac (the kids loved it!)  Passengers, said to be Gala and Dali, wave from the backseat of the car. 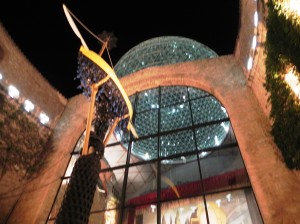 Before you leave, don’t miss the jewelry exhibit.  Gold, platinum, precious stones and other materials combine to form hearts, lips, eyes, plant and animal forms, religious and mythological symbols.  Some of the jewels in this collection, include The Eye of Time, Royal Heart (which is said to actually beat), and The Living Flower.  Just like his paintings, there is much symbolism to be found in his jewelry design.  Magnificent pieces!

After a good night’s sleep at the excellent, centrally located Duran Hotel (a place where Dali loved to dine and where he would spend many nights to avoid the long trek to his home on the coast) I headed off for the village of Cadaques for the last leg of the Triangle.

From the Hotel Duran, I walked to the Sarfa station to catch a bus to Cadaques.  The one-hour trip  included beautiful views along a winding road, first ascending over Rose’s Bay… 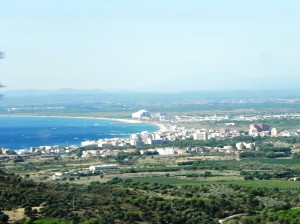 …and then descending into the quaint seaside town of Cadaques, with its popular beach. 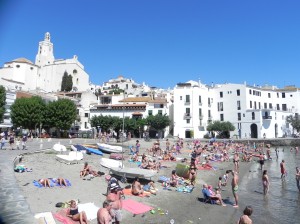 After wandering through the town, I quickly scouted out a table for a leisurely lunch with spectacular views of both the sea… 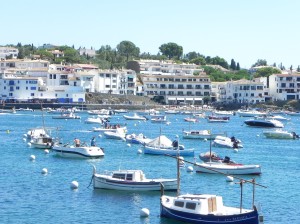 and the whitewashed village… 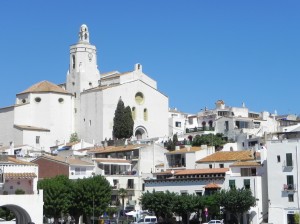 …another place I could have hung out for a few days.  But my appointment at Portlligat beckoned (you must make a reservation ahead of time to visit what was Dali’s home for more than 40 years—don’t make the mistake of many who assume they can get a reservation upon arrival.)  There are no taxis in town, but you can get a ride to Portlligat on little tourist golf carts (stop by the information booth near the bus station for info.)  They told me it was a 15 minute walk, so I proceeded on foot; however, due to the 95°+ sun and the mostly uphill route, 15 minutes fell far short of the mark.    But it was well worth it!

When Dali was 28, he bought his first fisherman’s cottage in this little seaside village of Portlligat, after having spent family holidays during his youth in Cadaques. 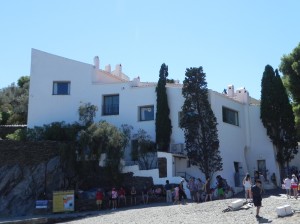 Over time, he purchased a total of 7 cottages which he molded into a multi-level retreat where he liked to claim he was the first person in Spain to see the sunrise every morning from his bedroom window. 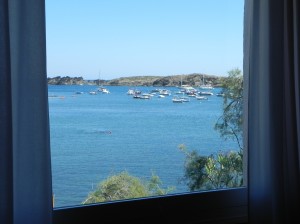 The house is a maze of rooms, starting with the Bear Lobby…

Around every corner and in every nook and cranny, the artist revealed his very eclectic style in the furnishings and artwork throughout. 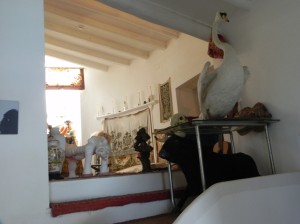 In his garden, you see some of his iconic symbols… 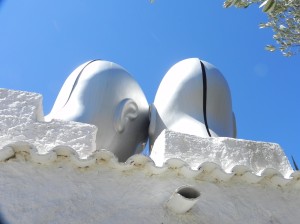 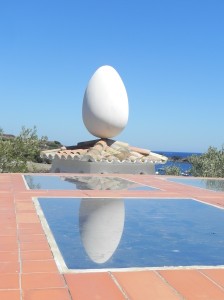 …including the phallic symbol lap pool… 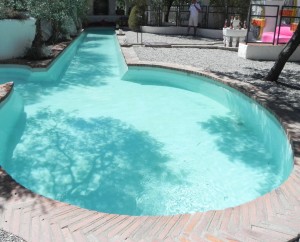 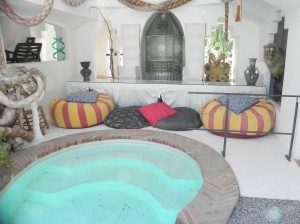 ….guarded by the Michelin man… 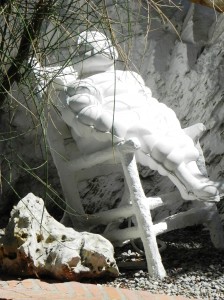 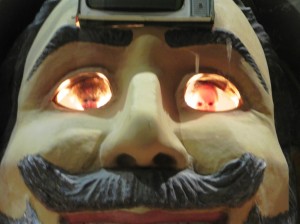 I would like to thank Gloria, my guide for the Dali Theatre-Museum in Figueras, as well as VisitFigueres, VisitCostaBrava, the Fundacio Gala Salvador Dali and the Duran Hotel  for assisting with my journey along the Triangle.

[Watch for details for a small group tour with globeDOTTIngTravel  to Costa Brava in the Spring 2014].
Tweet