As we walked through the teeming streets of Varanasi, our guide summed up his city as one of contradictions….

Modern vs. Traditional; Ugly vs. Beautiful; Chaotic vs. Peaceful; Faith vs. Vision; Life vs. Death. 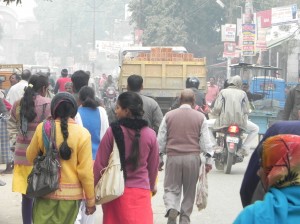 Varanasi is the spiritual capital of India.  It is considered by many to be the birthplace of Hinduism, while the nearby Sarnath is considered to be one of the primary sacred places for Buddhism and Jainism.  Varanasi is one of the oldest living cities in the world; some even say it is “the” oldest.  The city has a population of 1.2 million people, but hosts 5 million visitors each year.  To understand Varanasi, you first need to have some understanding of the Hindu religion.

[Caveat…I am not a religion expert, so this is my own simplistic version…based on limited knowledge.]

Hinduism is regarded as the oldest living religion in the world….over 5,000 years old.  Over 80% of the population of India is Hindu.  They worship a single God who is represented by different forms of gods and goddesses (such as Brahma, the creator; Vishnu, the preserver; and Shiva, the destroyer, to name the most widely known trinity).  These gods and goddesses are “symbols” and are a way of communicating with the almighty.

The Hindu religion did not originate from a single prophet; there is no single holy book such as the Bible or the Koran, but many holy books; and it is not institutionalized, but is individualistic.  The individual is not “obligated” to go to temple or to practice the Hindu religion, but is instead motivated by a desire from within.  They consider Hinduism to be a way of life; a code of human behavior…with the rituals that they perform being a way to keep body and mind in harmony.

I had always thought that India had a large percentage of Buddhists.  But instead they believe that Buddha was a reincarnation of Vishnu, and thus a part of their Hindu religion.

The city of Varanasi is important to Hindus because they believe that the Ganges River represents purification….immersing themselves in the Ganges River is a way to wash away all of their past, present,  and future sins. 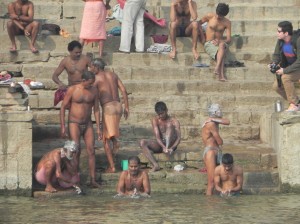 People come to the Ganges when there is a birth, a marriage, and lastly, to be cremated and their ashes immersed in the river.

Hindus believe that if one dies in Varanasi, Shiva liberates them from the cycle of birth and rebirth, which is the ultimate goal of any Hindu.

One of the main reasons for visiting Varanasi is to observe the rituals that take place along the Ganges River (aka, Mother or Ma Ganges).  Our first encounter was to attend an “aarti,” also known as a “ceremony of light,” which takes place at sundown along the bank of the river.  People observe from boats in the river or from the “ghat” (steps which lead down to the river) or from nearby balconies.  This is a ritual of thanksgiving to Mother Ganges for providing the most important element of human existence… water…which is the sustenance of life. 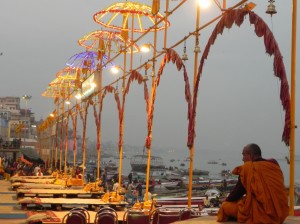 Seven young priests take part in this ritual, and they line up to perform the ceremony, first chanting and clapping. 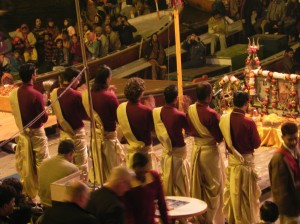 Then they each take their place at the seven stations which have been set up with sacred items used for the ceremony, which include flowers, conch shells, prayer bells, water, incense, multi-tiered lamps,  lamps with a snake hood, peacock fans and yak tail fans. 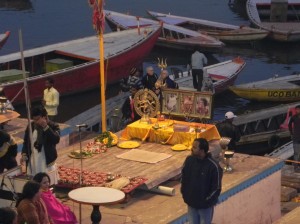 The priests sound their conch shells and ring their prayer bells.  They then burn incense to purify the mind… 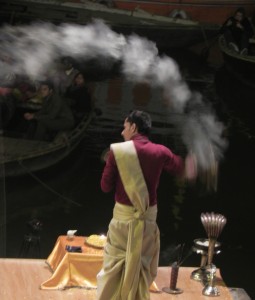 They perform the circling of the multi-tiered lamps in gratitude to Mother Ganges. 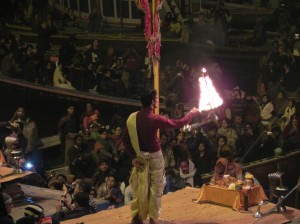 They raise the lamp with a snake hood and wave the peacock feathers and the yak tail fans representing the wind.  When it is over, there are a few moments of total silence before the buzz of humanity returns.

The next ritual to be observed required that we wake before sunrise and proceed down to the river to board a boat.  As the sun rises… 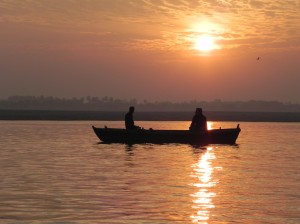 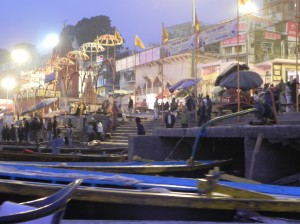 Sunrise is a time to communicate with Mother Ganges to seek energy, peace and tranquility.  They pray, meditate, drink the water, dip their bodies three times for absolution… 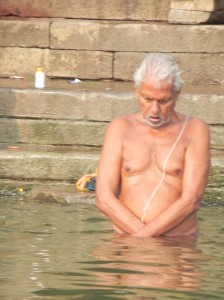 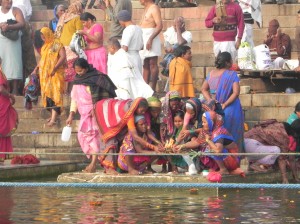 … and float little lamps with flowers as offerings to Ma Ganges… 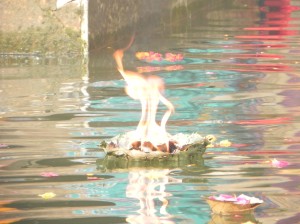 The people under the umbrellas sell items which help the bathers perform their rituals….

…such as mirrors, combs, sandalwood and vermillion powder.  They also maintain record books of the pilgrims who visit the river….records that are used by many to track past relatives (an antiquated version of ancestry.com?)

As we drift along the river, we reach the cremation ghats, areas where hundreds of cremations are performed each week.  When a relative dies, the body is wrapped in a cloth and brought to the river on a bamboo stretcher… 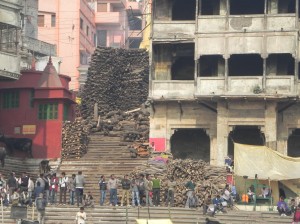 There is a stillness surrounding these areas, with the only sound being the crackling of the fires, several of which are burning simultaneously.

Another area of importance when visiting Varanasi is Sarnath, which is about 10 km away.  In the sixth century B.C., Buddha traveled to Sarnath, where he preached his first sermon about the four Noble Truths and the eight steps to reach Nirvana, which became the basis for the Buddhist religion.  The Dhamekha Stupa marks the spot where the Buddha revealed his insights to attaining enlightenment. 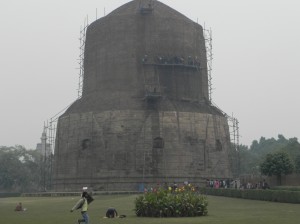 The face of the stupa displays delicate floral carvings… 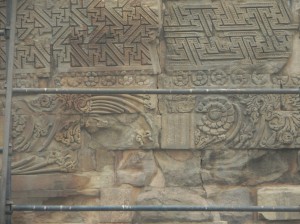 Sarnath became a flourishing monastery town with assembly and prayer halls, dorms for the monks, temples and stupas. 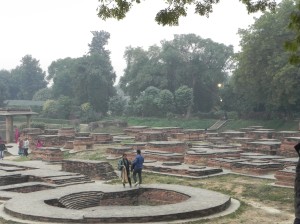 It is believed that there were once 1,500 monks living in the monasteries who would travel throughout India and abroad to spread the Buddhist teachings. 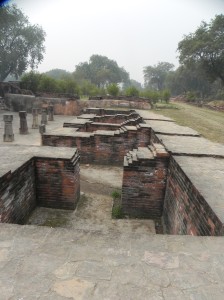 The town was destroyed in the 12th century and was lost until excavations in the 1800’s (some of which were led by a General Alexander Cunningham…hmmm, I wonder if we’re related?) unearthed the layouts of the monastery, a large temple and stupas.  Beautifully carved sculptures, many of which are housed in a nearby museum, were also excavated. The most famous of these is the one of four lions which had originally sat on top of a 40 foot high pillar, the image of which is now used as the national emblem of India.

This is an important pilgrimage site for Buddhists from around the world.

While many contradictions may abound in Varanasi, that’s part of what makes it such a fascinating place to visit.

My thanks to Shashank who was our guide during a portion of our visit to Varanasi, and who introduced us to the book written by his father, VARANASI The Luminous City, by Tarun Kani Basu.