When I heard the three tenors sing at the Opening Ceremonies of the Barcelona1992 Olympics , I thought, hmm, maybe I could actually like opera.  But I didn’t do anything about it at the time.  Over the years, I maybe went to two opera performances at the Met, with tickets someone gave me at the last minute.  Each time, I was glued to the translation monitors, totally oblivious to what was transpiring on stage.

Then last year, while planning my RTW trip, Australia and Russia were on my itinerary, so I thought it would be fun to go see opera at the Sydney Opera House and the Mariinsky Theater in St. Petersburg (opting for a ballet performance at the Moscow Bolshoi Theater).  In Sydney, the performance was “Carmen.”  And when I purchased my ticket, they sent me the synopsis.  With my long plane ride from Hawaii to Sydney, I had plenty of time to read it.

Then the evening came to attend one of the most famous, modern opera houses in the world (just seeing this and the other opera houses was a treat in and of itself) 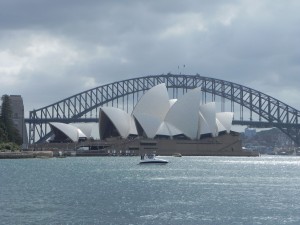 With the monitor almost directly above my head, I was glad I had read the synopsis.  And then, when it all started, I was blown away from beginning to end.   Since I knew the story, I could pay attention to the action on stage.  The performance even included a real horse!  I was starting to learn that it was not just about the arias sung by the soprano and the tenor, but is about the combination of the orchestra, solo and choral music, melodrama, dancing, multiple plots, comedy, tragedy, emotion  and spectacle.  I was starting to feel hooked.

Then almost a month later, at my stop in St. Petersburg, I saw Don Giovanni at the Mariinsky Theater (this time knowing I had to read the synopsis first, even though I knew the basics of the story).

While we were disappointed in the production from the standpoint of stage sets and costuming (not sure if that was done on purpose in the modern, “minimalism” style, or if it was due to under-funding), the electricity on stage captured me yet again.

About a week later, I arrived in Budapest.  I had never heard of the Hungarian Opera House, but now with my new awareness of opera, I searched it out upon my arrival. 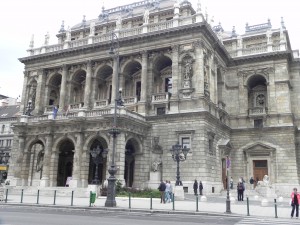 Otello was being offered later that week.  Upon my arrival at the opera house, I was amazed at the beauty of this opera house.  In my opinion, it was the most beautiful one of all, including the ones I was yet to see, as the next stop on my quest of opera was the Vienna Opera House. 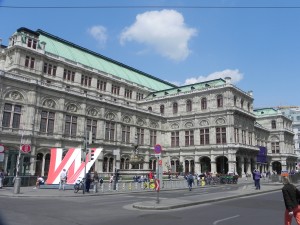 ….and Don Giovanni again. This time the sets were more in line with the performance, and I was enjoying the comparison of one production to another.

In Prague, the opera house was “dark,” with no performances during my short visit to the city.  So I instead went to a farsical marionette performance of Don Giovanni. 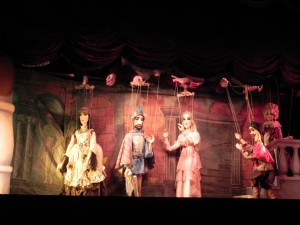 It was hysterical, and now knowing the story, I appreciated it even more.

On to London, and the Royal Albert Hall….Oops, that was not for opera, but for one of my other music favorites, Eric Clapton. 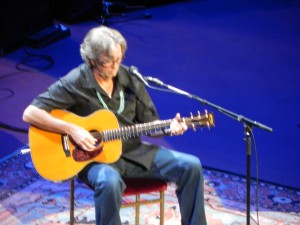 While opera is staged at Royal Albert Hall, the famous opera house in London is the one in Covent Gardens, which I will try to check out the next time I’m in London.  (On my most recent trip to London for the Olympic Games, I checked out Shakespeare at the Globe Theater, which had also been on my cultural bucket list). 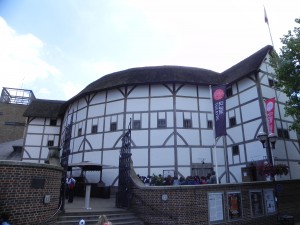 But that wasn’t all of my opera experiences on my RTW trip….when I was delayed getting out of Buenos Aires (due to volcanic ash from Chile), I decided to check out the Teatro Colon. 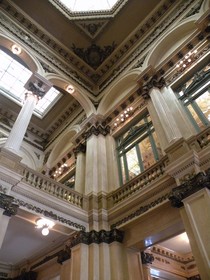 …another magnificent opera house.  There was a performance that evening of Puccini’s Il Trittico, a work which includes three one act operas  (many times only two are performed, since it is so long).  Well, it was a bit long and depressing, but it didn’t stop me from enjoying it for what it was.

You may be wondering why I am bringing all of this up now.  Well, it is because this past Sunday night (August 26, 2012), I went out to Lincoln Center for their Summer HD Festival to watch Don Giovanni on the outdoor screen in their plaza.

And my love affair continues….this series runs through Monday, September 3, 2012, and is a wonderful way to be introduced to opera for FREE.  But if you miss it, or you don’t live in New York, you still have many other opportunities to enjoy opera.

If you are an opera virgin, here are some tips:

#1.  There are opera companies all over the world, and there just might be one in your city.  Check out this list of opera companies.  The opera season is usually from September until June. For example, here is the schedule for the upcoming season for The Metropolitan Opera  here in New York.  A staged production is the best way to see Opera in all of its glory.

#2.  Seek out cheap ticket deals….just about every opera company will have them.  For example, the Met offers RUSH tickets for $20 or $25.

#3.  Starting in about September/October each year, Met Opera Live in HD  is shown not just in movie theaters in New York, but all over the country…and the world.  This is a good way to be introduced to Opera.

#4.  Start out with one of the traditional classics (not one of the modern versions), such as Don Giovanni, Carmen, Marriage of Figaro, Magic Flute…no Wagner for starters.

#5.  Read the synopsis before you go (all are available on the internet).

#6.  If you have an opportunity to go to one of the major opera houses in the world, give yourself time to enjoy the surroundings (at the Venice Opera House, for example, you can order your refreshments for the intermission before the show begins….they will assign you a table where they will have them waiting for you when you come out of the theater—champagne, finger sandwiches, pastries–the waiter made this into a way cool experience for me when he realized I was a newbie to the scene).

#7.  Try to pay more attention to the stage rather than the monitor.

#8.  Read the synopsis again after you see the performance.

I hope you’ll start to appreciate the Opera as much as I have come to enjoy it.  I still feel like an “opera virgin” compared to the real opera aficionados, but I can enjoy it just the same!

And, hey, if you are an opera aficionado, invite me along the next time so I can learn more from you!