Last year I had purchased a ticket to the USOpen, the fourth and final major tennis tournament held each year comprising the Grand Slam (the other three being the Australian Open, French Open and Wimbledon).  After sitting through intermittent rain showers all day last year, the day was officially ruled as a rain out.  So I got a rain check ticket for this year for the same session, which was September 5th,  the second Wednesday of the tournament and Day 10 of 14 total days.

My intention had been to spend the day getting to know the entire area within and surrounding the Billie Jean King National Tennis Center at Flushing Meadows-Corona Park.   Did you know that this park is bigger than Central Park at 1,200+ acres?  And that it was home to two World Fairs held in New York?  Anyway, so much for my intentions, as the tennis was so good, I found myself glued to my seat in the Arthur Ashe Stadium through most of the day. 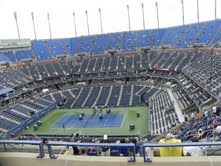 The day started out with a rain delay and I was feeling like it was last year all over again.  It’s always a good sign when the little squeegee carts come out to clear off the court. 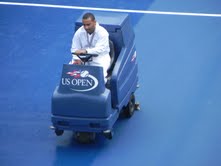 But Sharapova and Bartoli barely got out on the court,,,

…when the sky opened up and the rain poured down again.  Luckily after those two rain delays, the sun came out and play was able to continue throughout the rest of the day.  First up, Women’s Quarterfinal match with Sharapova and Bartoli. 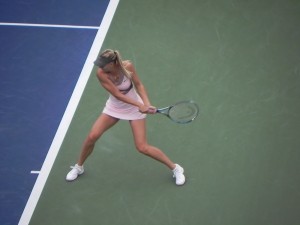 Sharapova won in three full sets.  (She lost in the next round to Azarenka).

The next match was a real treat…Del Potro vs. Andy Roddick, Andy having announced earlier during the tournament that this USOpen would be his final tournament. 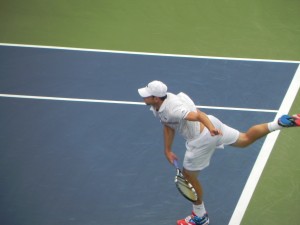 Unfortunately, Roddick lost, so this ended up being his last match as a professional tennis player.  He was quite emotional, with the pressure from his previous announcement catching up with him…

An emotional Andy Roddick after playing the last match of his career, USOpen 2012

But he made his rounds on the court, saying his goodbye to the fans who had supported him throughout his career.

I thought I would then head outside of the stadium and take in some of the grounds, when I realized that Andy Murray was playing on another court.  So I headed over to the Louis Armstrong Stadium and got to watch the Olympic Gold Medal champion beat the Croatian, Marin Cilic, in their Quarterfinal match. 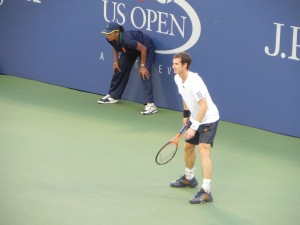 By the time that match was over (Andy Murray won),  I had been at Flushing Meadows for over 10 hours!  So no energy to check everything out as I had planned, but what a great day of tennis!

If you think you might want to attend the USOpen some day, I found, on the internet, these 10 tips for attending the USOpen, which you might find helpful.

However, I would make a couple of comments on these tips — first, although these tips tell you not to bring a bag, I’m not sure how you would carry everything you need such as umbrella, sweater, camera,  sunscreen, sun glasses, etc.  But one thing I would recommend is that you definitely don’t bring a BACKPACK.  They will NOT let you take a backpack into the Tennis Center and will require you to check it into lockers outside of the gates.  (They do allow the popular “drawstring bags”).  Also, no laptops are allowed (I did have my iPad, which they did allow).

Also, if you are there for the tennis, going outside to eat might prove to be a challenge (especially if you were facing some great matches as was the case for me).   And even though the ticket didn’t indicate that you could not bring outside food and drink into the Tennis Center, these items were being confiscated at the gate, so this is not an option (except for maybe an energy bar).  The food offerings within the Center are over-priced, and the hot dogs and hamburgers are not very good.  But there are a couple of options…deli sandwiches and barbq sandwiches… that are okay for a quick fix.   There was also a booth called “From Farm to Table” that may be worth checking out (if the line is not as long as when I was there).

The ground passes are a great deal for the first days of the tournament, as they get you into anything except Arthur Ashe Stadium, and even the best players have matches in the other courts in the early rounds.  And you can even go to the Qualifying Rounds FOR FREE which take place for four days prior to the USOpen main event.

While many of the best seats in the Arthur Ashe Stadium are reserved for sponsors, tickets to the USOpen are easily accessible, with American Express cardholders getting a first option to purchase tickets before they go on sale to the general public.

So if you are a tennis enthusiast, plan to take in this tournament to see the best players in the world, right here in New York City!

Watch the USTA site  for ticket plans for 2013.