>Left for my “Round the Island” trip at about 9:00am yesterday Good timing….missed the rush hour. Headed clockwise towards Pearl Harbor. As a previous military wife, couldn’t help but notice all of the military establishments here….Schofield Barracks, Tripler Hospital, Hickam AFB, Wheeler AFB, Pearl Harbor, Bellows, Fort Derussey, etc. Wow, didn’t think at the time how much military presence was on this island. It brought back memories of how much we all questioned the Vietnam war back then. We had a big white sheet hanging in our living room on which we had painted a huge peace sign that took up the whole wall (we were torn between our hippie culture and our military commitment). Other guys would come hang out–we had the best “pad” because I had a good job (was in charge of the word processing department at age 19 for the engineering firm, RMTowill Corporation–how I ended up in such a high level job at age 19 is yet another story)–although the only furniture we had was a waterbed–oh wow, remember those?–and maybe a futon) and we would talk about our mixed feelings about the whole thing. Some thought of fleeing to Canada, which was a choice of many military at that time. But always, in the end, love of family (and country, despite leadership blunders) won out, and we’d head out to Anna Bananas to drink to those who were serving on the front lines (oh wow, just googled them and they are still here!). It was also where I “came of age” — which in Hawaii at that time was age 20. (although I think I had my first “unofficial” drink at the top of the Ilikai). We really had it easy considering what was going on.

So, sigh, good memories despite the circumstances.

On to the north shore.

I stopped off first at dole pineapple — very touristy, lots of buses, but a good place for a break :-). Also picked up a few stocking stuffers. And escaped just as the buses were pulling into the lot. There is a turn off to the left where you can go watch the gliders, which is awesome, but the skies were dark, and the rain was starting :-(.

So I skipped that turn and headed on to Hale’iwa, known as the surfing capital of the world. It’s still not built up too much, lots of little unique shops, although there is a mcdonalds. And no hippie stands selling candles and tie-dyed. But the old surf shop is still there so I stopped in for a chat and to buy a “banzai pipeline” t-shirt. 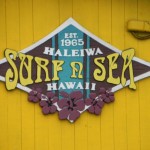 They thought I might be related to Mark Cunningham, apparently a famous surfer!! Then it was time to stop off at matsumoto’s for their rainbow shaved ice…there are lots of places selling these, but matsumoto’s is “the” original. (Kathleen, there I am! Making the Hawaiian sign for “hang loose.”. Although I now realize I should have had the back of my hand turned towards the cameraman. 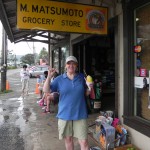 After exploring the town, I headed on to Waimea Bay, where I watched some folks jumping off of the rocks. The photos turned out decent, so I called them over and offered to email the photos to them. 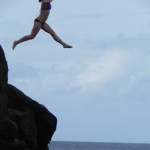 I walked into the water to get to them when a wave knocked me down flat on my butt (but camera saved!). — hey, Dennis, sound familiar? That’s yet another story for another time!!

Time to eat, so I headed up to Ted’s Bakery–they are most famous for the pies, but also have a garlic shrimp plate that is in keeping with the north shore shrimp offerings (the famous shrimp wagons are further up the road in kahuku, and I had wanted to go there, but I was hungry, and traffic was bad). The sun stayed out long enough for lunch under the umbrella. 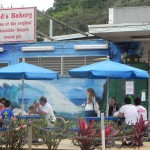 Then headed back to Sunset Beach and the most famous, Ehukai Beach, for the pipeline. The waves are weak at this time of year, but you can still see the curl. November/December is when they become awesome. No surfing here (although some further up the beach) because waves too shallow. 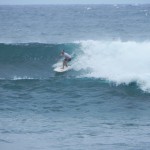 Then back to Waimea Valley where you can hike (really more like a walk) through the rain forest to the wai’ele (waterfalls). It appropriately poured down rain while I was there (in fact it poured off and on all day). Walking through the lush valley, you realize, this is the true “tropical Hawaii paradise.”. 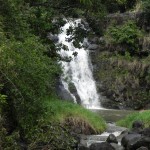 So I’ve used up most of the day on the north shore, and was determined to circle the island so started hightailing it up the road. (Jane, I took 83 to 61 to 72–my favorite road name–kalaniana’ole- which keeps you “mostly” along the shore. You can also go over to Kaneohe, but wasn’t sure I had time).

Made a few more stops, but the most notable was at the blowhole lookout…the blowhole was not very active, but the whales were off the coast…spraying and breaching….an awesome sight!! (too far away to share with you with a photo). Met a couple who had just moved here from Colorado, and we just sat there oohing and ahhing for who knows how long!

The minute I walked back into my hotel room, at about 8:00, after a fantastic day, despite the rain, and before I could even put my carryout onto a plate, the unexpected fireworks over the lagoon began (welcoming me back to my first home away home:-).

Not sure what I’ll do today, but I’ll try to check in before I take off to the “land of oz” tomorrow morning.

Mahalo (thank you) for all of your comments yesterday, many of them through facebook since many are having trouble commenting on the blog site. Email me too! Love hearing from everyone! Its a big part of this experience to know I am sharing it with all of you

– Posted using BlogPress from my iPad