I spent the last two weeks of January exploring Myanmar (or Burma) again. There is something about this country that keeps drawing me back. This time I was pleased to share my travels with some other explorers. 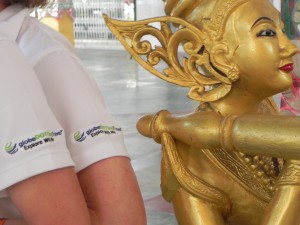 Our first stop was Yangon (known as “Rangoon” during British rule), which is the main arrival city for Myanmar (you can reach Mandalay from China, but flights from all other connecting cities arrive here.)  Yangon was the capital of Myanmar from 1885 until 2006.  It is still the largest city, with a population of 4 million, and is considered to be the most important commercial center, which was very evident during our early morning walk along the bustling waterfront…. 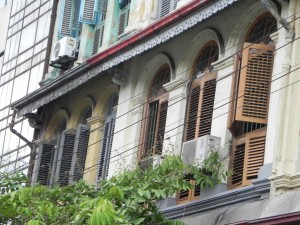 Yangon has the largest inventory of British Colonial Buildings in SEAsia

As the country opens up to international investment, it will be interesting to observe the fate of many of these buildings (with my commercial real estate “hat” on)…will they be redeveloped or will they be razed for the signature office towers seen in other Asian cities such as Singapore and Shanghai?  (It is somewhat encouraging to learn that a Heritage Trust was formed last year to work with the government to protect some of these buildings as part of an overall urban plan.)  Meanwhile, the current Yangon skyline is instead dominated by the 152 foot tall Sule Pagoda… 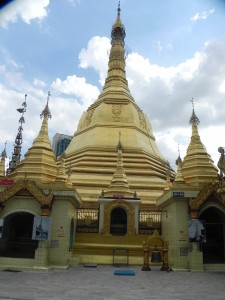 …which is said to be about 2,000 years old and is believed to hold a hair of the Buddha.  It is located in the center of town and was the focal point for the development of the city’s street grid system by the British.

We made brief stops at the Chinese and Bogyoke markets… 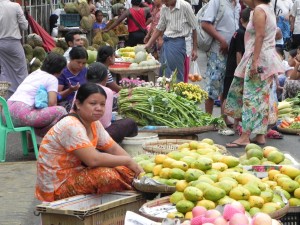 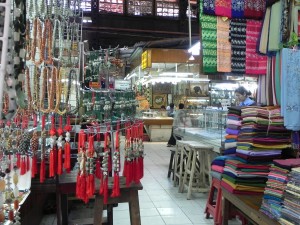 …stopping in the latter to purchase the standard wrap skirt known as a longyi worn by both Burmese men and women.  The women wear it folded over at the waist while the men form it into a knot.

Our guide was proud to point out the number of newspapers now available from street vendors…. 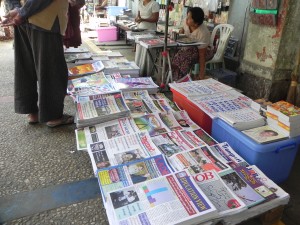 On my prior trips to Myanmar in Spring 2011 and Spring 2012, there were no visible news sources available on the street in this manner.  Even though the country still has a way to go regarding freedom of speech, it was refreshing to see the pride the people felt for this new media development.

Later in the afternoon, we went to visit the 230 foot long reclining Chaukhtatgyi Buddha… 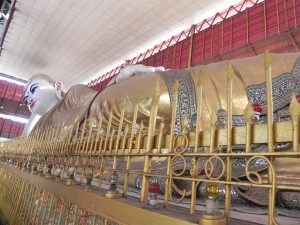 … topped by a crown encrusted in diamonds and other precious stones. 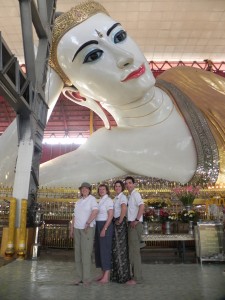 The soles of the feet of this Buddha have 108 distinguishing marks representing the three worlds of the Buddha….

…the essence of this being that the Buddha is greater than all three worlds.

Our last stop that evening was the magnificent Shwedagon Pagoda… 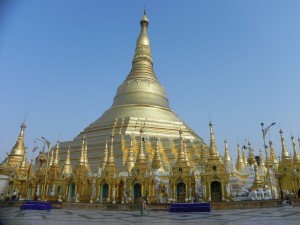 This pagoda is touted as the oldest in the world, having been built, according to legend, about 2,600 years ago.  It is also the most sacred Burmese pagoda, housing relics from all four Buddhas.  It is covered in 60 tons of gold and is 325 feet tall, although it did not attain this height until being rebuilt after the 1768 earthquake which caused extensive damage.  The crown (or umbrella) is said to have over 5,000 diamonds and over 2,000 rubies, with a 76 carat diamond bud at the very top. 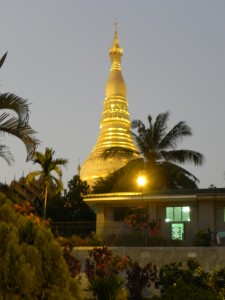 There are four long stairway entrances to the pagoda (from N, S, E and W), and shoes (and socks) must be removed before starting up any of these. (This tradition holds true for all religious venues within Myanmar.)  Once you reach the 14-acre terrace, you are to walk around the stupa clockwise, where you will see the many prayer halls which surround it… 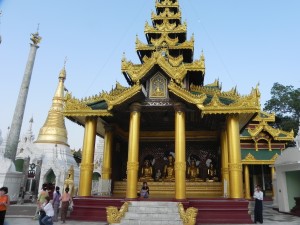 One of many Prayer Halls at Shwedagon Pagoda, Yangon

…and the many local people who have come here to worship…

There are also planetary stations surrounding the stupa representing different days of the week (each station is placed in a specific location such as north) and has a Buddha image, a guardian angel, and a planet and animal representing that day.  You are encouraged to present an offering and light a candle to the Buddha for the day of the week on which you were born, pouring water over the Buddha image, the guardian angel and the animal, with a prayer or a wish.  Having been born on a Friday, the animal for my day of birth is the guinea pig, while other animals include the mythical bird, Garuda (Sunday), tiger (Monday), lion (Tuesday), elephant and tuskless elephant (for Wednesday morning and afternoon, respectively), rat (Thursday) and dragon (Saturday). 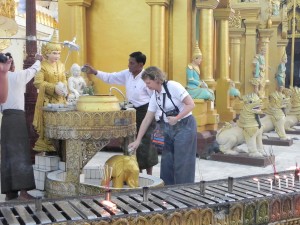 While this recognition of astrology, and the part it plays in one’s life, is not a part of the Buddha’s teachings, it is widely practiced in Myanmar and incorporated into many of their Buddhist pagodas.  Another religious tradition here is spirit worship (or “animism”).  These beliefs predated Buddhism in this country, and when Buddhism was introduced, many were not willing to “let go” of their worship of the spirits.  These beliefs are also therefore represented by many “nat” (or spirit) images throughout the pagodas of Myanmar. 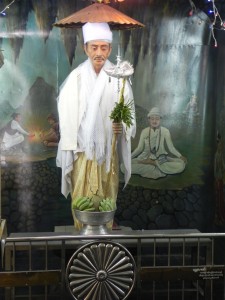 Besides the ‘sights’ of Yangon, we also enjoyed the extremely friendly people… 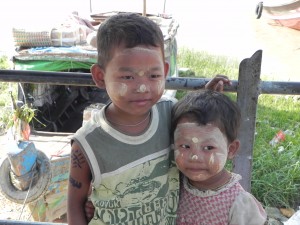 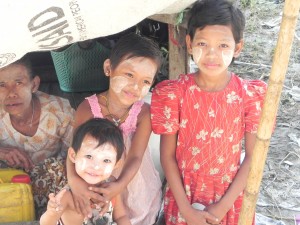 …and started to enjoy the food of Myanmar… 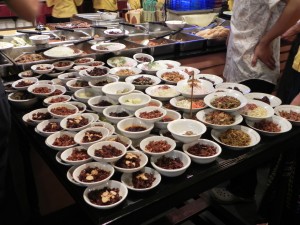 …including lots of plentiful fresh vegetables… 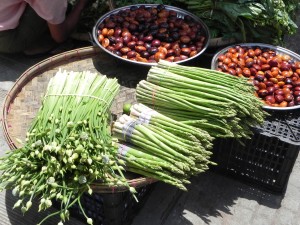 …at restaurants such as Feel Restaurant (a good local place with authentic Burmese food); Padonmar Restaurant (a bit touristy, but the food was great); House of Memories (good Chinese food, with some political history); and the ex-pat favorite, Signature Restaurant.

Our trip was off to a great start, with a pilgrimage to Golden Rock next.