[See my New Post for activities from July and beyond].

There is so much to do in NYC in the summer! If you are visiting, or if you live here but never seem to take advantage of what NYC has to offer, I thought I would provide you with some ideas of the vast offerings by posting anything here that I gather over the weeks of summer.  Plus try to inspire you further by sharing some of the activities that I choose for myself during this Summer in NYC!

I started out already with Shakespeare in the Park.  I’ll be posting my tips soon for getting tickets for this great NYC experience! 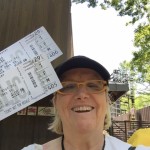 Shakespeare in the Park!

Here is just a sampling of what else is going on in NYC in the summer of 2015:

92Y “Talk” series continues throughout the summer (some are highlighted above)–the good ones sell out early.

Greenwood Cemetery Trolley Tours Wednesdays and Sundays throughout the summer.

See Forever!  At One World Observatory

There’s, of course, so much more! And if I see anything else over the upcoming weeks, I’ll update the calendar. Do you have any favorite events that I’ve missed that should be added to the calendar?

Join me in exploring all of the wonderful activities this Summer in NYC!