The most widely known “Shakespeare in the Park” offering in New York City is performed at the Delacorte Theater in Central Park.

These free productions often include one or more “celebrity” cast members.  I have been lucky enough to see several of these productions over the years, including Anne Hathaway in Twelfth Night; John Lithgow and Annette Benning in King Lear; as well as this year’s production of The Tempest with Sam Waterston, to name a few.  In the past I received my ticket through lottery, or from a friend who went to sit in line, or by being a sponsor.  This was the first year that I ventured out to experience the “line sitting” on my own.

The box office opens at 12 noon to distribute free tickets for the performance that will take place on the same evening.  The line starts forming at 6:00am which is also when the Park opens.  I arrived at about 6:40am and there was already a line. 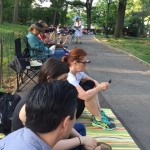 Sitting in Line: Shakespeare in the Park

Chairs and reading materials are recommended.  (I had my iPad with NYTimes.com and  downloaded books; as well as a couple of magazines I’d been meaning to read.)  Also, you might want to bring something to eat and drink.  But if you don’t have time to grab something, there is a local deli that passes out menus, and you can order from their bicycle delivery personnel. 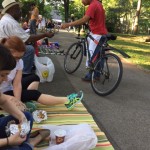 The day that I was in line, there was also entertainment by a few different musicians. 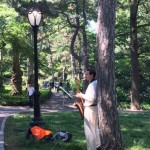 Sax in the Park

There are specific “line” rules, as announced by the onsite theater staff, such as you can’t leave the line (except you can take a short bathroom break – rest rooms are located next to the theater).  There is no saving a space in line for your friend who’s going to show up later.  Each person can obtain only two tickets.  By the time the box office opened, the line snaked through the park pretty far! 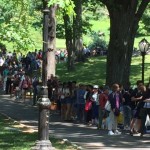 Line Behind Me – Shakespeare in the Park

I’m not sure what the best time is to get in line for your two tickets (some people say 7:30am at the latest; others say you may still score tickets if you’re there by 10:00am).

The day that I went the weather was perfect and the time flew by until I finally scored my own two tickets.

Score. Shakespeare in the Park!

If you want to arrive at the Park before the performance, there is a great lawn near the theater, adjacent to the Turtle Pond, where you can throw down your blanket and have a picnic supper.  But just in case you’re late, you can take your food and drink (no glass) into the theater.

Then at night, under the stars, on what is hopefully a beautiful clear evening, as it was for my night seeing The Tempest, you get to watch Shakespeare at its best in this great outdoor theater!   So give it a try as you enjoy #SummerInNYC! 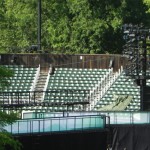 View of Theater from Belvedere Castle

Note:  TimeOutNY.com posts a “Complete Guide to Shakespeare in the Park in NYC” which should answer any other questions you might have about this Central Park tradition.