In addition to the widely known Shakespeare In the Park, which takes place at the Delacorte Theater in Central Park, there are numerous other opportunities to see Shakespeare for free in parks around the city…without standing (or sitting!) in line all morning.

So far I’ve tried out two of them. First,  the Manhattan Shakespeare Project is performing The Taming of the Shrew this summer. 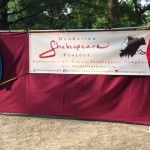 Although this play does not present my favorite storyline, the performance has a twist, as it is played by an all-female cast. 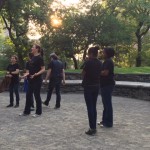 Taming of the Shrew All Female Cast

I attended their performance at Summit Rock in Central Park, which had a nice, intimate setting for this play. 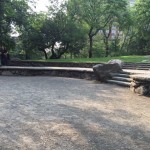 They also performed this summer in Queens at Astoria Park and Hunters Point; at St. Nicholas Park in Harlem; and at Sunset Park in Brooklyn. And, you still have a chance to see them at Morningside Park from July 9-12 and July 23-26.

I also tried out the performance by Theater 2020 at the “Shakespeare at Sunset” series at Brooklyn Bridge Park. This production was performed at Granite Prospect, just down the river from the Fulton Ferry Landing. 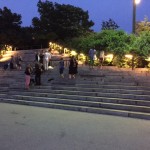 They presented The REAL Merry Wives of Windsor, CONNECTICUT, as you might guess, a more current day version. 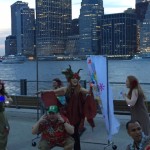 In addition to the great entertainment, the views of the Brooklyn Bridge… 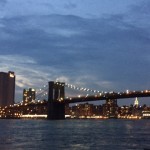 …and the Lower Manhattan skyline… 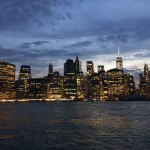 …added to the setting for this production. AWESOME experience!

Another Shakespeare at Sunset presentation at Brooklyn Bridge Park will be performed by NY Classical Theater. Measure for Measure shows from August 11-12 and 14-16.

But don’t think that’s all!.  There are many other options to see Shakespeare for Free in NYC…I hope to enjoy more before the Summer is over…

See my calendar for other upcoming Shakespeare productions…and enjoy your SummerInNYC.