When I left the Barcelona1992 Olympic Games, I had no idea I would be going to the Atlanta1996 Games.  Whenever anyone asked me if I was going (since I had gone to Barcelona), I would say “no” – because part of the Barcelona experience was visiting the city itself, and I had been to Atlanta many times.

In fact, on the first day of the Atlanta1996 Games, watching TV as Muhammad Ali  lit the Olympic cauldron, I still had no idea I would be going!

But I became obsessed with the events on TV.  I was staying up until 2:00 in the morning watching the events that had occurred the day before…the USA swimmers dominating the swimming events; Kerry Strug, limping off of the vault mat, leading the USA to a team gold.   I could NOT get enough.  And the news had been making a big deal out of the fact that event tickets were available if you could get there.  Finally, on Wednesday, the sixth day of the Games, I went into my office and announced that I was going to go to the Olympics if I could get a plane ticket and a hotel room.  Believe it or not, everyone else was less surprised than me by my change of plans…since I had been coming into the office with bags under my eyes and talking about nothing else.

A bit of a different approach to planning than that of my first Olympics in Barcelona 1992 .

So, I called Delta Airlines (one of the sponsors of the 1996 Games), and I booked a ticket for Friday morning.   Now I was committed.  But I had to first find a hotel room, right?  Well, the office manager (who had some hotel connections because of her boss) and I worked on that most of Wednesday…no luck.  On Thursday, I thought I had a room, but at the end of the day, the hotel called Kathleen back and said they were mistaken, they didn’t have a room available.  My plane was departing Friday morning…what should I do?  Should I write off the plane ticket I had bought, or should I get on the plane without a room?  I knew some people in Atlanta, but not well enough to ask them to put me up.  (This was before couch surfing was a recognized sport).  I arrived in my office on Friday morning with my bag…still no luck with a room…the time had come for me to make my decision…

And I was off to the airport!

On the flight from Hartford, Connecticut (which was my home base at the time) to Atlanta, I kept asking myself, what are you doing?  What if you can’t get a room?  What are you going to do?  Was there anyone I knew there who would take me in for a few days?   Would I be able to get a flight back home if there were no rooms to be found?

As I got off of the plane in Atlanta, I saw a familiar face in the crowd…Kathleen had called up one of our business colleagues in Atlanta and asked him to pick me up at the airport (this was before mobile email) and take me to the Hilton Hotel, where she had been able to get me a room.  A night of homelessness on the streets was narrowly avoided.   On the way to the hotel, I told Phil that I would be happy with a closet under the stairs.  But would you believe, I had a suite, at the price of a regular room, as that was the only room that they had left, and they had given up selling it as a suite.

Phil told me that other colleagues of ours were also in town for the Games, and they were all having dinner together, so we headed off to the sports bar.  I was living right!

Then, on a somber note for the Atlanta Olympics, I really wanted to go to Olympic Park after dinner, as I had been seeing on TV all of the fun concerts and other activities that were going on there.  Everyone else was too tired, so they took me back to my hotel.  That was the night that the bomb went off in the Park.  I didn’t know about it until about 4:00 the next morning, when my phone rang in my room.  All of my friends had been looking for me, as the news had initially reported that a lone woman by the stage had been killed by the bomb (in addition to over 100 people wounded).  I had left a quick message the night before with one friend letting her know that I was at a Hilton, so she called all of the Hiltons in Atlanta to find me.  Needless to say, she was quite relieved when I answered the phone.  And I was of course quite saddened that such an event had taken place at the Olympic Games, which are to me a symbol of friendship and unity.   The Olympic Park was closed for the next five days.

Despite my heavy heart, I got up and headed downtown on the MARTA train to the Westin Peachtree Plaza, as I had heard at the sports bar the previous evening that the Westin had set up a consignment office where tickets were being sold for events that were occurring on the same day.  There was not a really long line, so I was afraid there must not be any tickets for sale.  They had a chalk board inside of the little office which listed the event tickets that were available, and there was a better selection than I would have thought.  And many times there was just a “single” ticket–and I said “I’ll take it!”   Over the next four days at the Games, I was able to get at least one event ticket each day.  My first day at the Games, I got a ticket to baseball and women’s basketball.  So off to the Games I went…

I saw the U.S. get defeated by Cuba in baseball (Cuba went on to win the gold medal). 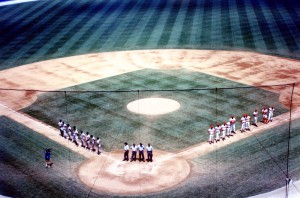 Women’s basketball was next on the agenda, with Japan vs. Italy (neither made it to the finals).  But there was one player on the Japanese team who reminded me of Ming, the basketball player from China…she’s easy to spot! 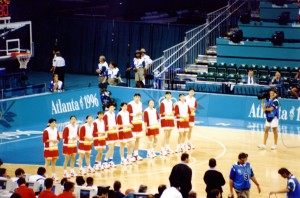 I went to multiple Track & Field days at the main stadium 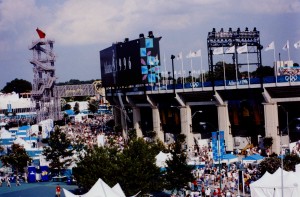 ….including the day that Gail Devers won the gold for the 100m race (she had also won the gold in Barcelona)…. 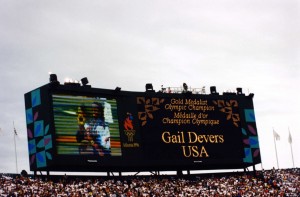 Michael Jordan qualified for the 400m (he ended up winning gold in both the 200m and 400m).  But, remember all of the hoopla regarding his “gold” shoes?  Check them out here as he made the turn in the qualifying heat… 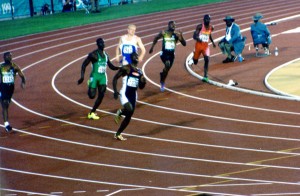 Carl Lewis also won his 9th gold medal…his 4th gold for the long jump…in his 4th Olympic appearance.  (He was way on the other side of the stadium, so any picture looks like a little speck).

I tried a couple of new events…table tennis—I saw the finals with China vs. China.  I wasn’t sure who to root for in that one.  But it was interesting and fast-paced.  And I saw the women’s synchronized swimming, which I wasn’t expecting to like, but I did! 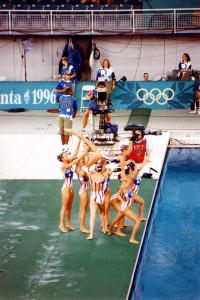 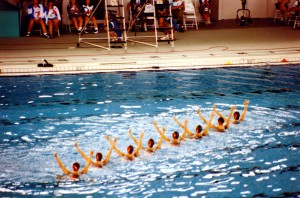 My last ticket was for Men’s Springboard Diving Finals, in the wonderful Georgia Tech Aquatic Center.  On the overhead screen, I kept seeing myself as they panned the crowd…I seemed to be right in line with one of the main cameras.   Mark Lenzi of the U.S. took the bronze… 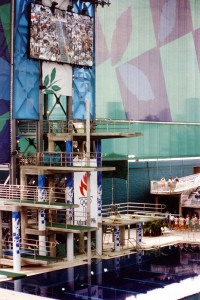 On my last day in Atlanta, the Centennial Park reopened, and I got to experience the magic that had been created in the center of town for the Atlanta1996 Centennial Games. 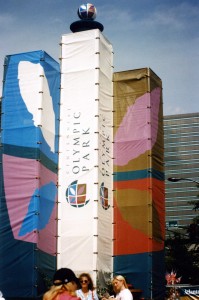 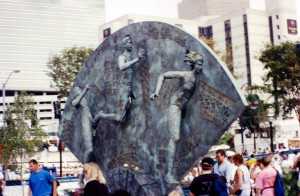 Although I spent a shorter time in Atlanta than I had in Barcelona in 1992, and had not planned the trip ahead of time, it was another wonderful Olympic Games experience. 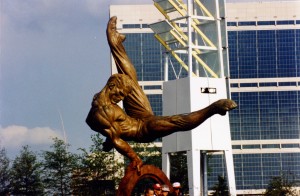 And I got home in time to watch Gloria Estefan sing at the Closing Ceremonies, the song “Reach,” which she wrote together with Diane Warren – with perfect lyrics to honor the Olympic athletes….

Next Olympics stop for me…Beijing 2008.