On my recent trip to Spain, I made a special trip from Girona down to Barcelona to attend a production of Madama Butterfly at the Gran Teatre Liceu, as I continue my growing love affair with opera.  (And opera houses!).  This opera house, located on the famous La Rambla in Barcelona, opened in 1847.

When it opened, it was the largest opera house in Europe with 3500 seats.  It differs from other European opera houses, as it was not financed by the monarchy, so includes no royal box.  It was started by private shareholders who built it to “promote musical education” (thus the name, Liceu or Lyceum).  Due to fires and a bombing during the Civil War, most of the inside has been rebuilt, however, the original façade remains in tact. 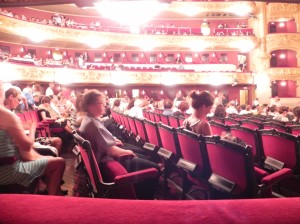 When I returned home from Spain, I was lucky enough to be in time for the Lincoln Center/Met Opera HD Summer Festival 2013, where I enjoyed productions of Maria Struada, as well as Aida, on the big screen.

And so, my love affair with opera continues!

[See my opera tips at the end of my previous post].