After our two great days in Mandalay, we stopped off to watch the making of gold leaf before heading to Monywa.

The artisans start out with about 2 ounces of gold which is pressed and cut into 200 pieces, which are then stacked on top of each other and secured to a rock.  A man straddles the rock and pounds for a half-hour after which it is divided again, making 1,200 pieces.  It is pounded for another half-hour and divided yet again.  The workers perform a final round of pounding for 5 hours…

…ending up with thousands of 1” square pieces of gold leaf (I lost track of exactly how many thousands), which are placed between sheets of handmade paper and made into packages of 100 sheets each.

You will see people all across the country applying this gold leaf to pagodas or Buddha images.  They also use it in the manufacture of lacquerware.

We continued heading to Monywa, which is about 100km from Mandalay.  On the way, we stopped to stroll through one of the villages.  We were lucky enough to see the children decked out in their initiation (rite of passage) costumes… 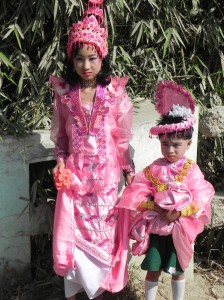 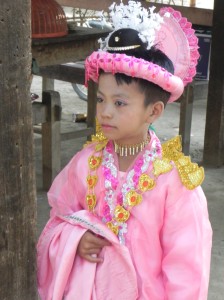 …this means they will have their heads shaved and will live in the monastery for one month, after which they will decide if they wish to remain there as young novice monks.  For the young girls, they will have their ears pierced.  The procession which usually accompanies the ceremony had actually occurred the day before, but other festivities were planned for later on this day, including the ritual head shaving. 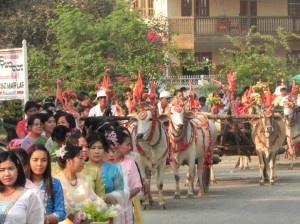 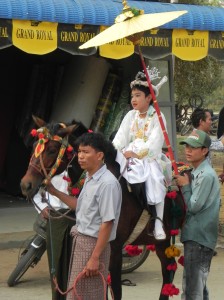 We made another stop to visit the Laykyun Setkyar (Standing Buddha) statue, which is the second tallest Buddha statue in the world at a total height of 129 meters or about 425 feet (the largest is in China). 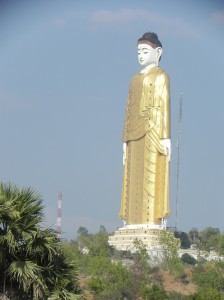 Also, at the same location, is the longest reclining Buddha in Myanmar at 333 feet long… 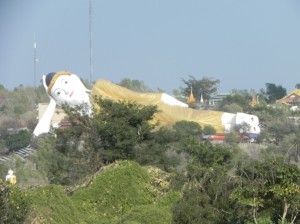 …as well as the Buddha garden, containing 1,000 Bodhi trees (sacred fig trees), each with a Buddha image seated in front of it. 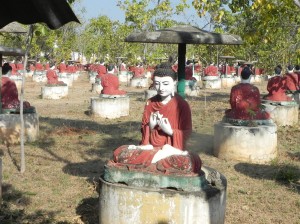 One last stop was made at the Thahboddhay Pagoda complex, which is reminiscent of the world-famous Borobudur Temple located in Java, Indonesia, and is the only structure of its kind in Myanmar. 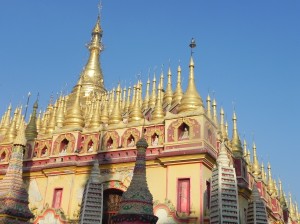 It was built during the 14th century and contains more than 500,000 images of Buddha (including all of the pinhead rows of Buddhas in the below photo)…. 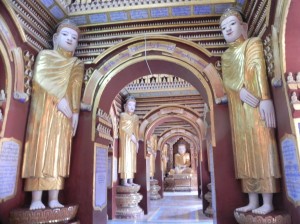 We arrived at our hotel in Monywa that evening, looking forward to our visit the next morning to the sandstone caves of Hpo Win Daung, where there are over 900 caves carved into the sandstone, dating back to the 14th to 18th centuries.  These caves are considered by archaeologists to contain the richest collection of mural paintings and Buddha statues in Southeast Asia.  They are not on most of the standard tour routes, and as can be seen by the photos below, they were among the highlights of our trip….. 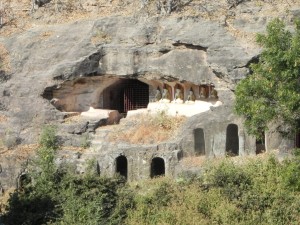 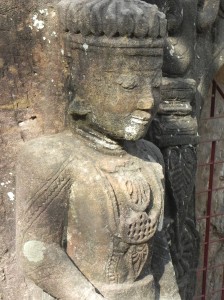 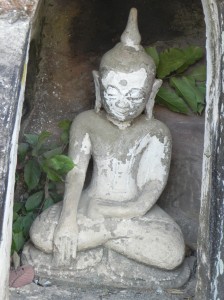 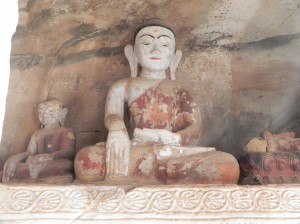 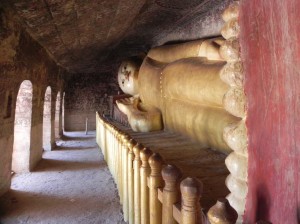 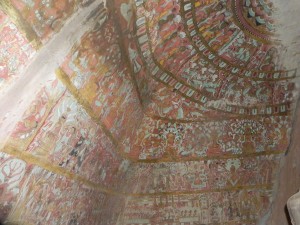 Sample of painted walls in cave at Hpo Win Daung 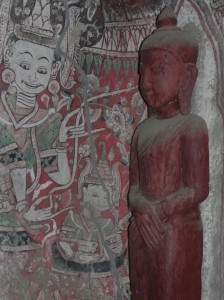 After leaving the caves, we proceeded to travel to Bagan, where we were able to catch one of their spectacular sunsets. 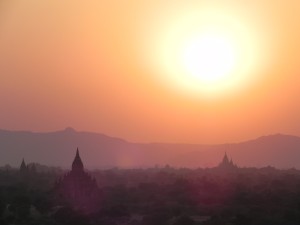 We spent the next two days exploring Bagan and its awesome display of shrines, temples and stupas.