In 1992, I visited La Sagrada Familia for the first time during my trip to the 1992 Barcelona Olympics.  At that time, construction on the church had been at nearly a standstill since Gaudi’s death in 1926.  Only one of the three facades, the “Nativity” Façade… 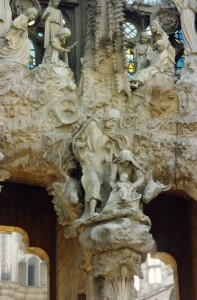 and four of the spires… 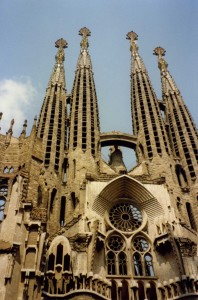 …were complete at the time of my first visit.  The “Passion” Façade was partially completed… 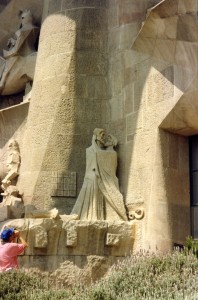 The building had a few of its stained glass windows in place, and was also not enclosed at that time, but was open to the elements.  People (and there were only a few on the day of our visit) were allowed to climb in and around the church at no charge. 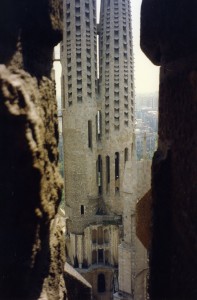 View from inside stairway of La Sagrada Familia, 1992

Discussion was heavy at that time about whether or not construction on Gaudi’s masterpiece should resume.  The arguments against were:  #1-cost, and #2-if the church were completed by others, it would lose its historical significance as a work of Gaudi.  But others felt that completing the vision that Gaudi had set out to create would honor Gaudi’s architectural genius, and the cost would be recovered through tourist dollars from those coming to view what would end up being the tallest and most unique church in the world.  I found the latter argument to be substantiated when I visited Barcelona in September 2012 and was unable to get near the church due to the hundreds of people in line to see the progress of construction, now estimated to be complete by 2026, the centennial of Gaudi’s death.

So before going to Spain last month (July 2013), I purchased a ticket on-line  which would allow me to skip the long line to get inside of La Sagrada Familia.

To be honest, I wasn’t expecting to be that impressed.  I just wanted to check it off—you know—been there, done that.

But I was blown away.  The inside of the church was magnificent! 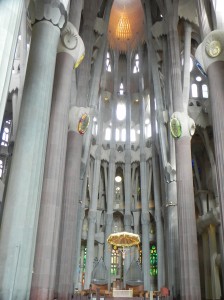 How Gaudi decided what it would take to hold up a 45 meter (almost 150ft) high nave is beyond my imagination.  Using a model of upside down strings and weights, he was able to study the natural distribution of weight.    Being heavily influenced by nature, he used the concept of trees and their branches to design the columns, inclining them in such a way to absorb the various weight loads.  And while the flowery “hyperboloid” forms may seem to be decorative features of the ceiling, they are all part of the geometric equation. 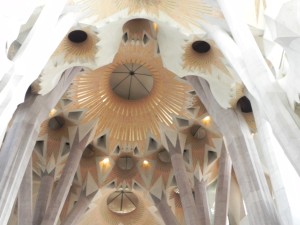 All of the stained glass windows are unique, each having special symbolic meaning, but they were also placed in such a way to allow maximum light into the interior during the day to eliminate the need for artificial light during daylight hours. 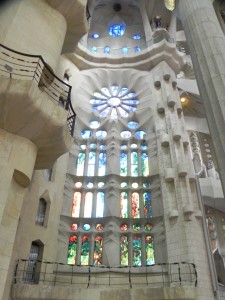 These benches that were around the perimeter of the interior were specifically placed for the members of the choir (what one might call “surround sound”). 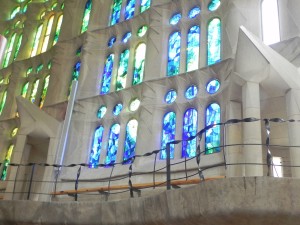 As I started to better understand the concepts which Gaudi had incorporated into this structure, I had an even better understanding of the façade of the building, including the Nativity Façade, dedicated to the birth of Jesus.  This façade, which faces the rising sun, includes a “Tree of Life” represented by a cypress tree…. 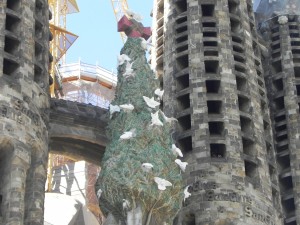 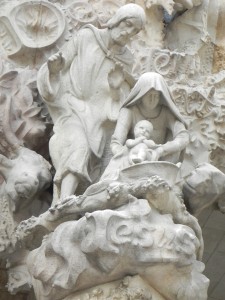 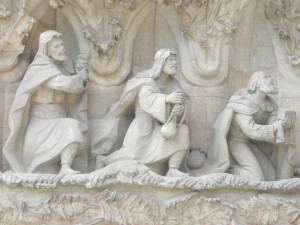 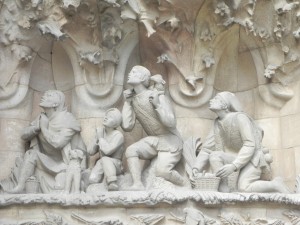 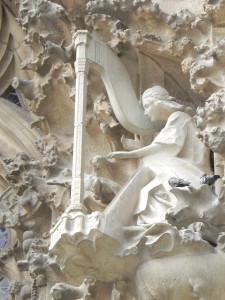 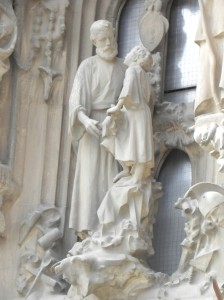 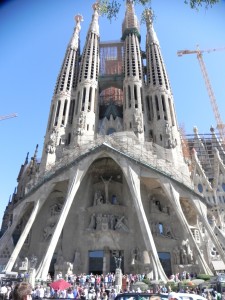 …depicts the time up to and including the crucifixion of Jesus… 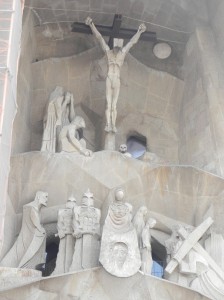 …including the trial, the Last Supper and the Kiss of Judas… 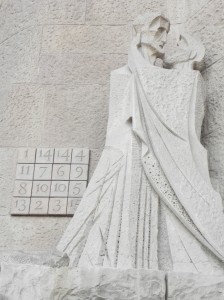 This façade, which faces the setting sun, was completed in a more austere and plain manner, with rigid and angular forms… 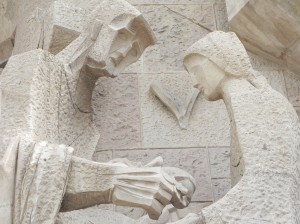 …to illustrate the severity and brutality of Christ’s sacrifice.

The last façade, the Glory Façade, is still under construction… 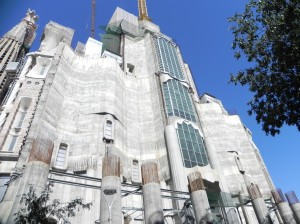 …and will be the largest of the three.  It will become the entrance to the church upon its completion.  It will portray the ascension to God and will have representations of the 7 deadly sins and the 7 heavenly virtues.  It faces south where the sun will beat down on it throughout the entire day.

Overall, there will be a total of 18 spires…12 representing the apostles; 4 representing Matthew, Mark, Luke and John; 1 for the Virgin Mary; and the last and highest one representing Jesus. The completion of that final spire will result in this being the tallest church in the world, at 170 meters tall (about 560 feet).

Every detail, every carving, every window, every door, every decoration had meaning to Gaudi….making La Sagrada Familia well worth a visit!

Gaudi in Context and Things to See in Barcelona

Contact us for custom travel planning to Spain (or other travel destinations).