As I prepare to leave for London for the Olympic Games, I long to reminisce about my three previous trips to the Summer Olympic Games, beginning with Barcelona in 1992. 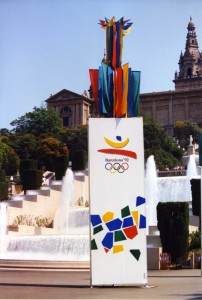 It all started when I asked my niece where she wanted to go in Europe for her 16th birthday. And she answered…..”Barcelona for the Olympics.” As we are both avid fans of the Games, how could I not agree? Luckily, the Games were not until her 17th birthday, so I had an extra year to save my money, having no idea (when I casually said, “ok”) how much something like this would cost. I told her that she would have to do the research and figure out how one even goes about getting to the Olympics. Little did I know, that she would be able to figure this out (remember, folks, this was 20 years ago—no internet…no google—hard to believe, huh?). She started making calls (from a land line of course, remember those?)….to the Olympic Committee, the Spanish Travel Bureau, etc. Then one day, she lucked out, and there was an article in the newspaper which reported that “Olson” was the travel company that had been assigned by the U.S. Olympic Committee as the distributor of the tickets for any U.S. residents who would be attending the Games. So she gave them a call (again, not as easy as one might think with NO internet) and signed us up to receive the ticket information when it came out. 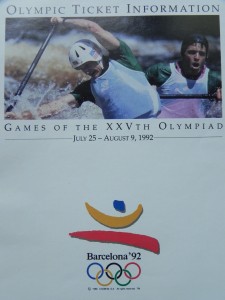 So we waited….and kept following up with Olson…until about 15 months before the Games, when we received a package which seemed to be about 100 pages of information about how to apply for tickets. The deadline to return it was about 12 months prior to the Games. Luckily, we were getting together at the beach before the deadline, so we could work on it together. Which we did….we laid on the floor at the beach house, while everyone else was out enjoying fun in the sun, and we perused the instruction booklet until we figured out how it worked. For each day (or each time frame), you had to pick a first and second choice ticket. We pored over the booklet for hours, strategizing as to how to fill out the form, so that we would have the right combination of choices so we would get some of our preferred event tickets (the usual: swimming, gymnastics, basketball [that was the year of the “Dream Team”], track&field, etc). We also had to make sure that if we picked more than one event in a day, the venues had to be close enough so that we could get from one venue to the other. We also signed up for the “hospitality” package, which included your hotel room. As you can guess, those packages were extremely overpriced. But never having been to the Olympics before, we opted to choose one to ensure we would have a room for the Games (plus thought, just “maybe,” it might affect our ticket selection…of course, one never knows). The company which currently distributes the tickets (Co-Sport) has hospitality packages that actually include a certain number of specific event tickets to ensure you will get to see some of the key events. For the Barcelona Games, we chose the Aquarium Hotel which was in Lloret Del Mar along Costa Brava. It was 1-1/2 hours away from the city, but was more affordable than hotels located right in the City. BUT, it would require us, both non-morning people, to get up before the break of dawn to catch our bus into Barcelona.

We got our submission in before the first deadline for the allocation of tickets. If your first choice event was not oversubscribed in that first round, then you were awarded a ticket to your event; if it was oversubscribed, then allocation was based on a random selection of names; if you didn’t receive a ticket for your first choice in that process, then it would go to your second choice event. (Are you confused yet?) Assuming that we would not get all tickets for all time frames, we applied for 18 different events over the course of 10 days; some days applying for 2-3 different time frames. So now all we could do was wait, for what seemed like an eternity, to hear back. Then……..when the envelope arrived, my palms were all hot and sweaty as I called my niece, while I opened it up to see what event tickets, if any, we scored. We got tickets for all 18 time frames we had ordered! Not always our first choice (and none for the U.S. basketball dream team), but nonetheless, we had 18 event tickets…we were on our way to Barcelona! 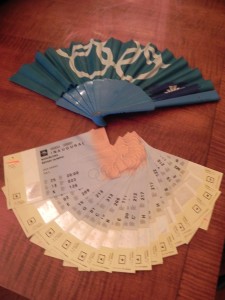 And what an experience it was. Starting out with the spectacular Opening Ceremonies….remember all of the colorful costumes that year…. 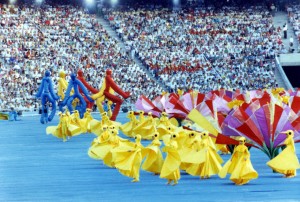 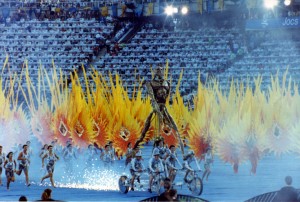 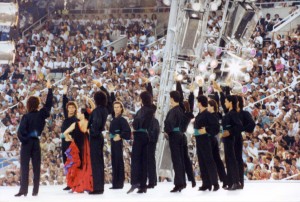 Then there was the amazing parade of Athletes…. 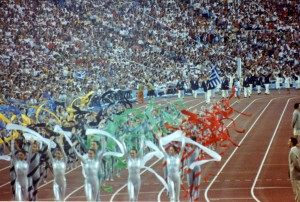 …as they jammed onto the stadium’s field, and the audience lit up the stands with lights…. 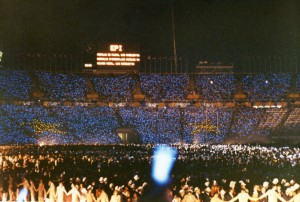 But the real excitement that year at the Opening Ceremonies was the archer who successfully shot an arrow up into the cauldron to light the Olympic Torch….or so it seemed. 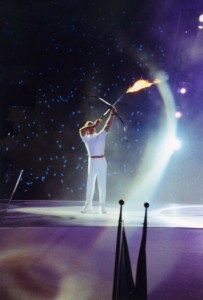 As to the Games themselves, we saw Nelson Diebel (swimming: 100 meter breaststroke) win the first gold medal for the U.S. 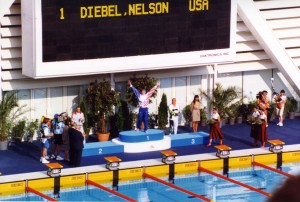 We saw Preliminaries and Finals of other men’s and women’s swimming events, including Nicole Haislett (she won three golds that year), who came up into the stands to sign autographs…. 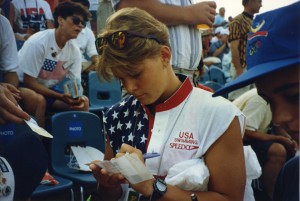 …along with Summer Sanders (2 golds, 1 silver and 1 bronze)…

On a side note, we ran into some family members of Summer’s on the train, and found out that her dad was trying to get a ticket to one of the events. It was an event that we had tickets for, and since we had scored a “dream team” ticket after arriving at the Games, which conflicted with that event, we agreed to sell him our tickets….we met them in front of the swimming venue the next day before the event, and it was so fun to see their excitement when we showed up with the tickets!

We saw diving from the fantastic venue overlooking the city of Barcelona and La Sagrada Familia (not a great photo of the view, but you can use your imagination)…. 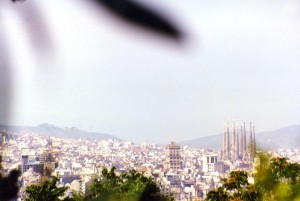 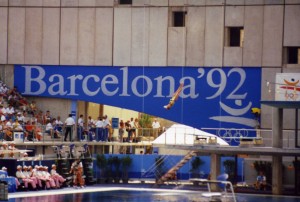 ….. the DREAM TEAM….Johnson, Jordan, Barkley, Ewing, Drexler, Bird, etc. It was amazing to look down from the stands and see all of those players on the same court! (Barkley really overdid it with the slam dunks at that game; we felt sorry for the other team)…… 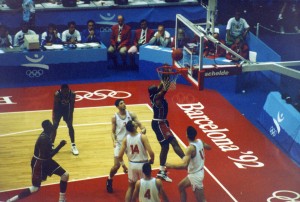 ….women’s gymnastics…Kim Zmesklel was to have been the star that year, but she was off her game, but we still got to see Shannon Miller win the overall Silver… 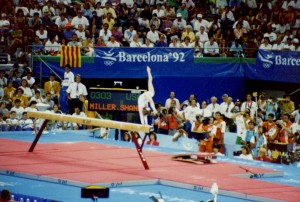 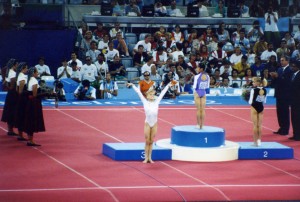 Another side note: Michael Douglas and Jack Nicholson were at one of the gymnastics events we attended, and they were sitting about twenty rows BEHIND us…who are the real VIP’s at the Games?…anyway, we relished in that.

We also enjoyed rowing, water polo, and some track and field.

I do want to mention that we didn’t only root for the USA team (although they were obviously our favorites), but we cheered for the Spanish home team who won the football gold medal….we clapped for the Australian swimmers who gave the USA swimmers a run (swim?) for their money…we were overwhelmed by the Chinese divers, we cheered for the Australian basketball team (why? well, there was this really cute guy…)…we supported the South Africans who joined the Games for the first time since being suspended in 1960…and we cheered for any Olympic or World Records being made, no matter who it was. After all, that’s what the Games are all about….unity, friendship, sportsmanship. And that’s what draws me to the Games every time.

But another star of the 1992 Olympics was the City of Barcelona itself. We fell in love with Gaudi’s architectural genius… 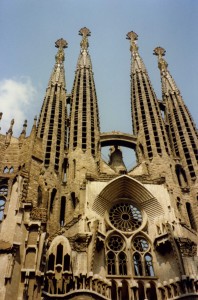 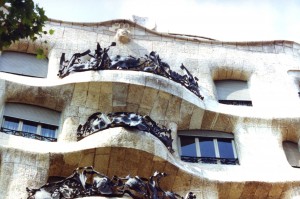 They had just opened a Joan Miro Museum right outside of the gates of the main Olympic stadium, so one day we went to get out of the heat. They had a wonderful café, so after that, instead of eating the stadium hot dogs that are prevalent at the Games, we occasionally opted for soup and salad at the museum café…it was NEVER busy! Plus we fell in love with Miro… 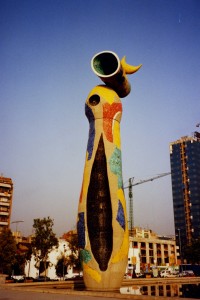 We took in the intimate Picasso Museum, and learned more about Picasso’s childhood in Spain. We ventured up to Figueras, to visit the fantastical (not a word?) Dali Museum, with eggs and people and people with bread on their heads lining the rooftop (we loved it)… 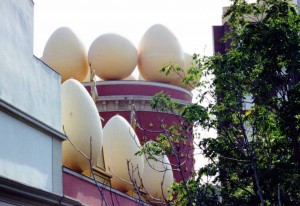 We also took the gondola up to Montserrat…. 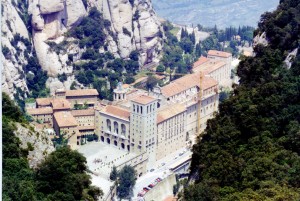 And we wandered up and down Las Ramblas… 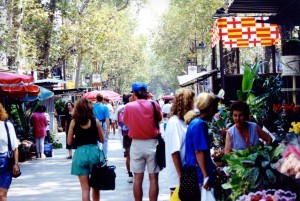 What a travel experience! And if I thought I had Olympic Fever before, after that, I was really hooked. As I stood in front of the Olympic flame with my Atlanta1996 t-shirt on, I had no idea at that time that I would be going to the Atlanta1996 and Beijing2008 Games, and I am now on my way to London2012! 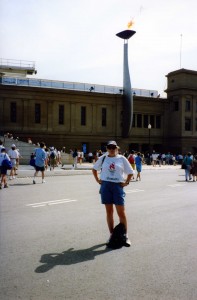 Follow me as I soak in the excitement in London!!