New York is magical at this time of year!  I love to wander the streets and feel the wonder of the Holidays. 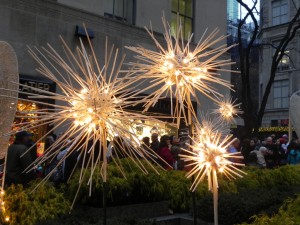 Since I live here, I take it for granted that everyone knows what New York has to offer until my out of town friends call and say:  ”I’m coming to New York during the holidays…what should I do?”   So I’ve put together some highlights of what New Yorkers – those who can withstand the crowds, that is! –  love at this time of year.

Christmas Windows.  Of course, everyone knows about the department store Christmas windows but you may not know where to start.  I found this great walking tour map to help you get around.  I set off this weekend to check it out for myself.  I took the #6 subway which drops you off at Bloomingdale’s where I started out viewing their “Cirque du Soleil” themed windows… 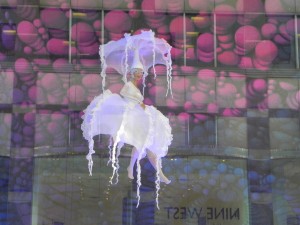 …then headed around to Barneys (theme:  Minnie Mouse fashion show video – the kids loved it) 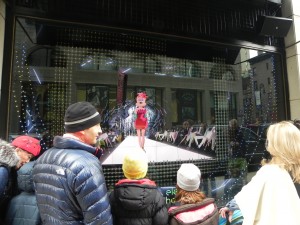 Next stop Bergdorf’s, which is always my favorite, with their theme this year of the Follies. 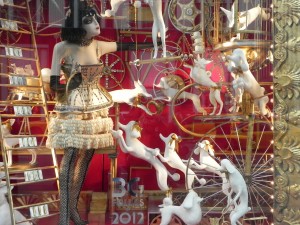 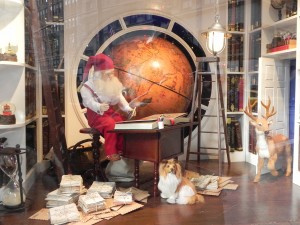 …then around to Lord & Taylor…

Holiday Markets.  Along the way I stopped at the Holiday Market in Bryant Park which is my favorite at this time of year.  But there are many others, as set forth in this extensive Holiday Market Guide.  (Grand Central is another favorite, but when I found this Guide, I realized there are plenty of others that even I need to explore).

Other Shopping Options.  Besides the department stores and the Holiday Markets, there are many other unique stores to visit.  My NYCREW colleague, Faith Hope Consolo, has put together an assortment of retail establishments, as seen in the Huffington Post, where you can focus on setting your Holiday Table.

Train Shows.  Since my dad worked on the railroad, I’m always a sucker for the Christmas Model Train layouts, and there are two on offer in New York…one at the New York Transit Museum in Grand Central, and an even more elaborate display at the New York Botanical Garden in the Bronx.

Ice Skating.  The most widely known ice skating rink in New York is located at Rockefeller Center.  But there are plenty of other places to glide across the ice as eloquently described by my blogger friend, Jeff Dobbins, in his recent post, Ice Skating in New York, including the new Lakeside Rink in Prospect Park, Brooklyn.  On my Christmas window jaunt, I did stop off to watch the skaters at Bryant Park (while having some wonderful hot cocoa concoction at their café, Celsius). 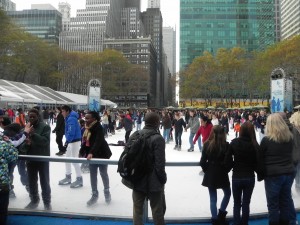 Rockefeller Center.  No trip to New York in December is complete without checking out the Rockefeller Center Christmas Tree.  If you want to capture it in a photo to tweet back to your friends at home, you will have to exhibit extreme patience, as everyone else is trying to do the same.  But for me, it’s all a part of the experience.  [And treating myself to a glass of wine and a snack afterward at the Morrell Wine Bar across the street was an added plus]. 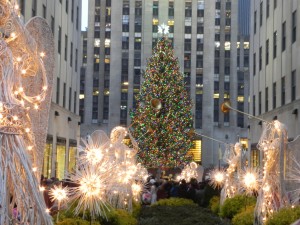 Concerts/Events.  The City is jam-packed with concerts/events during the holidays.  There are the standards:  Radio City Christmas Spectacular; Lincoln Center’s annual Nutcracker ballet (while BAM in Brooklyn offers its own version of the Nutcracker this year–2014 only); How the Grinch Stole Christmas (closed 2014); etc.  There are also many other lesser known options such as the St. John the Divine Winter Solstice concert, or the Christmas Concert at St. Bart’s.  Book one of the standard Broadway shows or take in one of the many jazz shows (for example, at Jazz at Lincoln Center), or take in a cabaret show at Club 54 Below.  Or head down to the famous nightlife venues in The Village.

These are just some of the wonderful offerings in New York during the Holidays!   So Come and Explore NYC with me!

2 Responses to "Christmas in New York"

Leave a replyLeave a Reply to PatriciaG